If Bush is going to be held accountable and responsible for the "Mission Accomplished" banner (which was factually correct, the Mission of removing Saddam Hussein was what was accomplished and what the banner reflected - no matter how much the sad-sack Liberals want to distort that), then MrsSatan...well, she's not much of a speller now, is she? 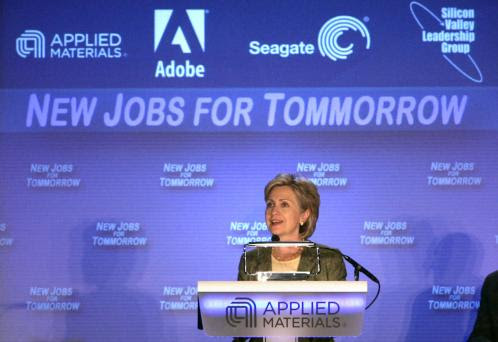 The Democratic front-runner stood before a crowd of 200 CEOs and valley insiders Thursday at the Silicon Valley Leadership Group's annual business climate summit announcing the theme of "New Jobs for Tommorrow."

Tomorrow and tomorrow and tomorrow,
Creeps in this petty pace from day to day,
To the last syllable of recorded time;
And all our yesterdays have lighted fools
The way to dusty death.
Out, out, brief candle!
Life's but a walking shadow, a poor player,
That struts and frets his hour upon the stage,
And then is heard no more. It is a tale
Told by an idiot, full of sound and fury,
Signifying nothing. - Macbeth V. v. 19-28.

And no finer idiot, especially full of sound and fury signifying nothing , is there than MrsSatan.

Comments:
"which was factually correct, the Mission of removing Saddam Hussein was what was accomplished and what the banner reflected"

That is so sad.

Uh... that's sad. Not only is it in the main large type... it's all over the entire background.

I found a new youtube video I just posted in my blog... you may be interested in it. If you get a moment, check it out.

You *DO* know that ousting Hussein was something Clinton-Gore wanted to do, years before "W" even set foot in the White House, right?

Or are you saying Hussein should have remained in power?

Hi Bug - I will get over to your site in little while.

Say, I wish you had your comments on for everyone, I just want to let you know I liked your site re-design and what you recently wrote about, your son considering joining the military, is commendable. He must be a fine son indeed. Tell him to think it through, though. Take care.

I didn't know my comments were off... I thought they were set for those who have blogs but not just anyone passing through. I suppose I could set them for everyone but them moderate them to avoid the spamming.

I would love to hear your comments on any of my posts... it should be fixed by the time you get back. :o)

HEY Bug - I didn't mean they were "off". I meant, it looked like your comment option was set to be open for only members of your blog. I may have misread that. I will try later today.