To one degree or another, the usual MSM outlets are covering this same story from Science Daily:

The Institute of Medicine, a branch of the National Academies, is suggesting additional restrictions on cigarette smoking. The report proposes a two-pronged approach to further reduce tobacco use in the United States.

Among many of their ideas, here are some highlights (bolding mine):

* Changing federal law to give FDA (Food and Drug Administration) [the] authority to regulate tobacco products, including powers to restrict how they can be marketed.

* Launching additional efforts aimed at curbing youth interest in smoking and access to tobacco, including bans on online sales of tobacco products and direct-to-consumer shipments.

* Requiring new, large pictorial warnings on the harmful effects of smoking -- similar to those required in Canada -- on all cigarette packs and cartons.

* Requiring manufacturers to correct false or misleading information on products and at the point of sale.

* Restricting the type or number of outlets that can sell tobacco products, and requiring them to display warnings and give a proportional amount of space to cessation aids.

* Prohibiting tobacco companies from targeting youth for any purpose and urging them to redirect money they now spend on prevention to independent public health organizations.

* "We propose aggressive steps to end the tobacco problem -- that is, to reduce tobacco use so substantially that it is no longer a significant public health problem. This report offers a blueprint for putting the nation on a course for achieving that goal over the next two decades."

* As a long-term strategy, the report also recommends that FDA look into developing a plan to gradually reduce the nicotine content of cigarettes and thereby decrease their addictive power.

Cigarettes are a unique consumer product in that they contain carcinogens and other dangerous toxins and would be banned under federal public health statutes if these statutes did not expressly exempt tobacco, the report states.

So...because the substance is tobacco, that gives the Institute of Medicine the right to control the First Amendment rights of how cigarette makers want to advertise their product, limiting it to "text-only, black-and-white formats"?

And, because the substance is tobacco, that gives them - or the FDA - the right to decide who, where and what locations and types of businesses can and will be allowed to sell tobacco?

And cigarettes are not "a unique consumer product in that they contain carcinogens and other dangerous toxins".

Just look at the cosmetic industry, the dirty little secret in carcinogen-laden industries. Every-day items of common cosmetics are rife with carcinogens.

From the Cancer Prevention Coalition:

The National Institute of Occupational Safety and Health found that 884 of the chemicals available for use in cosmetics have been reported to the government as toxic substances.

A U. S. General Accounting Office report notes that the FDA has committed no resources for assessing the safety problems of those chemicals which have been found to cause genetic damage, biological mutations, and cancer. Because of minimal regulation, products plainly dangerous to your health can be, and are being, sold.

And from Co-Op America:

Suzanne was surprised to find out that nearly all of the personal care products she uses on her face and body contain ingredients suspected of causing cancer; potential neuro-, liver-, and immunotoxins; and suspected hormone disruptors that could cause birth defects in any children she might bear in the future.

Perhaps we should regulate and work towards banning steak, hamburgers, chocolate, pies and ice cream, making them less flavorful , thereby reducing their addictive qualities so people will stop using them. These items cause heart attacks, blood clots and other long term illnesses because they contain unhealthy fats and sugars. We need a "blueprint" to put the nation back on track for more healthy citizens. Far too many fatties out there.

And some of you think I "go too far" when I call these people Anti-Smoking Nazis. Nothing could be further from the truth. The only thing they lack is the goose-stepping and "sieg-heiling" each other - and I bet they perform these when the curtains and shades drawn. 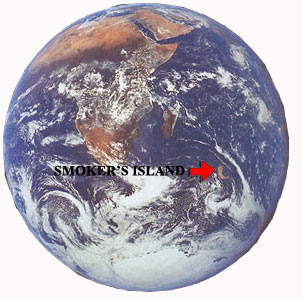