"If Ireland can ban cigarette smoking, we can do it too,"

- said Long, Loooooong Time Minneapolis House of Rep., Democrat Phyllis Kahn, supporter of the bill and Grande Dame of Nannyism, on the Minnesota House Floor during the No-Smoking Bill debate on May 11, 2007. Kahn is also the Representative who proposed tax increases on cosmetic surgery.

So...no offense to Ireland...but Minnesota is now modeling its state laws and legislative procedures after Ireland?

The "Freedom To Breathe" bill - the name bestowed on our No-Smoking Law - was signed into law on Wednesday, May 16th, by Minnesota RINO Governor Tim Hatch. The bill goes into effect October 1, 2007.

The primary co-sponsors of the bill are State Representative Tom Huntley and Speaker of the House Large Marge Kelliher. 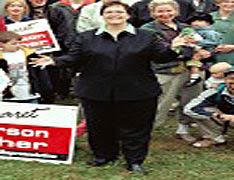 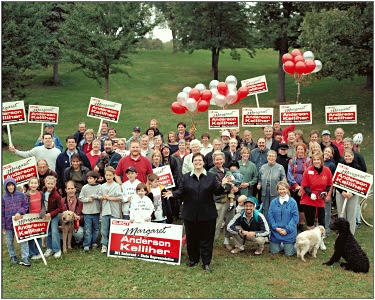 Note To Margie: maybe you want to put down the box of Cheese Doodles, fudge sundaes and Dove Chocolates if you're so concerned about health, especially your own. You certainly look like you can afford to shed a few pounds, Margie.

The Democrat Political Majority in the Minnesota Legislature and many RINOs take its Nannyism attitude towards its citizens seriously. They specialize in intruding into private property rights and individual rights.

The hardest hit businesses will be the small town establishments where people gather for a beer, a pizza and a cigarette.

Smoking will still be permitted in tobacco shops, American Indian ceremonies and Indian Gambling Casinos, the Washington County Veterans Camp, family farms and - are you ready for this - on stage by actors.

So let me understand this; the health of non-smokers on family farms, non-smoking actors and patrons of the theater are inconsequential according to this bill? Apparently there's no "leveling of the playing field" in these areas. Such compassionate Nannyism.

Back to the theater; the legislature, via this bill, is telling us that is it vital and "artistically critical" that if a character smokes it's allowable on stage. What about the health of a non-smoking actor, a stagehand or the theater patron in the front row who may inhale one molecule of second-hand smoke?

The only logical conclusion one can draw is that the sponsors of this bill and its lobbyists - like the American Lung Association - don't care about the health of these people. Remember, the ALA and other self-righteous No-Smoking Nazis have told us there is "NO safe amount of exposure to second-hand smoke! NONE!"

Nor do they care about the health of non-smokers who visit or are employed by Indian Gambling Casinos. Que Sera, Sera.

How To Circumvent This Law

Here's the "out" for any bar, nightclub, tavern and pub to allow smoking; become a "Bar and Theater."

Build a small stage, one which adheres to the minimum of what state code defines and requires, and allow the actors - the bar patrons - their right as Performance Artists to recite lines from plays from the stage whenever they feel the need to fire up a cigarette.

Who would want to deny any female bar patron who wanted a cigarette from reading from scripts provided by the bar, scaling the stage, performing Lady Macbeths' ..."out, out damned spot! Out, I say...," without a Virginia Slim Light Menthol 100 or a Misty hanging out of her mouth?

"Othello" not chain-smoking Kent Golden Lights? Banish the thought of it.

Why, if I'm at a Bar-Theater and want a cig with my run 'n coke, I'll tear a page out of Neil Simon's "The Odd Couple" and step up to the stage:

I, as Oscar Madison, enter the apartment he shares with Felix Unger:

"Felix," yells Oscar, lighting up a Marlboro, "is dinner ready?"

"Tonight, all the customers at the Hot Spot Bar And Grille perform 'Our Town'."

Who can argue with a Bar-Theater and its group...because it's Performance Art.

Perhaps bars, clubs and nightclubs could declare themselves a "farm" by adding a few chickens, some corn stalks and pole beans to their indoor decor: "Hey, we're not a bar. We're a family farm that just happens to have a bar and dance floor."

Smoking Okay On Patios... For Now

Smoking will still be allowed on outdoor patios of bars and restaurants, at least until next year's legislative session. I have a feeling patios will be the target of the No Smoking Nazi-Nannies next year. The only reason patios were excluded from the current version of Freedom To Breathe is that proponents of the bill knew that including language banning smoking on patios would be a bill-killer. 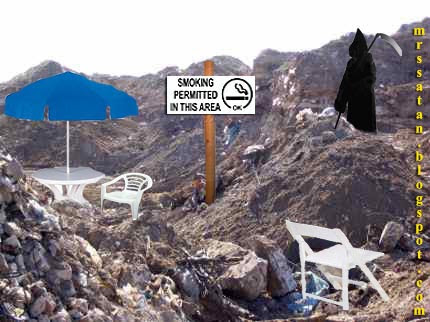 An earlier version of Freedom To Breathe included an option for bars and restaurants to have a separate, walled and enclosed smoking room. This option was killed by the Dems.

Democrat Michael Paymar, on the Minnesota House Floor during the No-Smoking Bill debate on May 11, 2007, said:

Paymar is another one, like Large Marge, who could easily drop anywhere between 30-50 pounds of excess weight. But he's a good Socialist, so his anti-smoking rhetoric is embraced by other good Democrat Nazi-Nannies who are more than willing to overlook any adverse health effects related to his obesity.

Democrat Al Juhnke, on the Minnesota House Floor during the No-Smoking Bill debate on May 11, 2007, said:

"There is no uniformity in this bill. One city may not permit patio smoking and the adjoining city permits patio smoking."

Oh my god, Al - can you work the word "epidemic" into your rhetoric - say, something along the lines of, "the fact that there's no uniformity defining patio smoking is an epidemic!"

Watch out - come next year's session the Nannies in the State Legislature will "level the playing field" of outside patio smoking.

It's Not About Smoking

Beyond the previously mentioned losers - the small town bars and Mom 'N' Pop establishments - this bill ensures lower revenues for charitable gambling. Fundraising for groups such as Firefighters and local youth sports teams - among others - will all receive less money because a primary customer base of bars - smokers - will be less in number. Instead, smokers will stay home or will be found at the Indian Casinos where none of the charitable gambling venues exit.

Business owners and homeowners will likely face future increases in property taxes in order to make up for these deficiencies. But so what, this is what Democrats and RINOs live for and do; meddling and intruding in things that the free market and the rights of private property should decide and resolve on its own.

This bill isn't about health and it's not about second-hand smoke. The bill is nothing more than a small minority of groups - individual people and organizations - with deep pockets who flushed enough money into their like-minded lobbyists and political puppets who are only too eager and subservient to do their bidding.

They have successfully destroyed private property rights for the people who own these businesses. It may not matter that some of the No-Smoking Nazi-Nannies aren't even offended by cigarette smoke, it's only that they are swelled with self-power and inflated with a Nanny mentality.

Dennis Ozment, Republican from Rosemount, on the Minnesota House Floor during the No-Smoking Bill debate on May 11, 2007, said:

"[The bill] is a mean bill. It is mean-spirited to smokers."

Yes it is, Dennis, yes it is. But being mean has never stopped a Nannyism mentality is the past and it's unlikely to stop it in the future.

* Photos of Margaret Kelliher used in the above post are from http://www.margaretandersonkelliher.org/bigpictures.html and are "as is". No attempts were made to make Large Marge look any...weightier...than she is.

Comments:
uh, we have a similar law here, and have had it for sometime now. if i desire a burn i go outside. can be a real bitch in winter, but then you get real good at getting something to break the wind. cannot tell you what i smoke though. sorry, national security thing.

Put out that dog rocket!

I'll be on the patio (gurgle, gurgle, sound of inhaling...)