Ted Mondale, son of the former Worst.Vice.President.Ever, Walter "Fritz" Mondale, has never held a "real" job in his life. He's spent his life being appointed to heading one government or quasi-government agency after another, based on nothing more that his last name.

Little Ted is also out to Save Suburbia, being an anti-"Urban Sprawl" - Pro-Mass Transit type of guy.

Which is funny, because if he'd chosen his personal transportation to be Minnesota's Famous Light Rail Train Trolley, why, then he wouldn't have been PINCHED DRIVING WHILE INTOXICATED! Oh, dear my, the irony, the irony, the su-wheet taste of irony:

Mondale said he went to a Twins game Tuesday night and then to dinner with friends downtown, drinking a couple of beers at the game and wine with his meal. "I'm guilty," he said. "Whatever the punishment, I'm going to obviously accept it and never do that again."

Mondale, 49, said a State Patrol trooper stopped him on westbound Interstate 394 between Penn Avenue North and Highway 100 as he headed to his St. Louis Park home. The trooper told him he was speeding and then asked whether he had been drinking, Mondale said.

Mondale, the son of former Vice President Walter Mondale, said he admitted to drinking, took field sobriety tests and was taken to the Hennepin County jail. On the advice of his attorney, Mondale said he refused to take a blood-alcohol test at the jail.

Whoa - he "refused to consent to a blood-alcohol test." He must have been REALLY PLOTZED (definition #1).

It's funny - downright hilarious - when Democrats get arrested for drunken driving because tragedy plus time equal comedy. Outrageous, hilarious, knee-slapping, spit coffee out your mouth like Danny Thomas - type comedy.

I'm certain Drunky McMondale will claim the usual Democrat Talking Points For When Being Arrested DUI:

1) Admit, whether it's accurate or not, that you have an uncontrollable drinking problem (consult with Ted and Patrick Kennedy if needed),
2) Announce you will immediately enter a rehab and treatment facility,
3) Afterwards, emerge as one of the preachiest and self-righteous speakers against drunken driving.

Not surprisingly, MADD has NOTHING on their site about Ted The Drunk Driver. Not a word. Oh, MADD notes and links to stories about Paris Hilton's drunken driving, Prom night and underage drinking, but not a word about Ted Mondale and his drunken driving. The Minnesota Chapter of MADD doesn't mention Drunky Ted either. You don't suppose this has anything to do with MADD being far more politically Liberal than they are Conservative, do you?

Let's watch this case very closely and see if he receives a "privileged" sentencing or if he's treated like any other "Ordinary Ted" who gets pinched for driving while intoxicated.

Upon being arrested he is alleged to have said, "Do you know who my daddy is?" 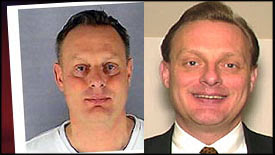 (Oh, those parts about him singing and saying "do you know who my daddy is," - I made them up. Wait - let me restate that, I have not yet confirmed he didn't say those things.)

Comments:
This is terrible! how dare you say these things! this none of your buisness and you should leave him alone! you don't know this man and you shouldn't be posting this stupid blogg on him. he's a good man and he admitted to driving drunk. just because he refused to take the blood test doesn't mean he was really drunk. it was his decision. i've refused to it before when i wasn't drunk and i've been taken to jail. so leave him alone! this is stupid and so are you!

He's a public figure worthy of all the criticism and condemnation he brought upon himself when he inserted the key in the ignition, knowing full well he was tanked to the gills. He's a socialist who advocates bigger government, more taxes all for his own personal Liberal agenda.

You, my dear anonymous troll, are an idiot. You should stay in jail the next time you get arrested.

I'll say any damn thing I please on my blog. You're lucky I published your comment, since I do not normally published anonymous comments. But yours is so rank, so self-righteous, so pathetic - I couldn't help but publish it in between fits of laughter at your immature rant.

Are you Ted's ugly sister Eleanor, who talks and sounds as if she has testicles in her mouth?