Bee And Butterfly Announce
They Are Gay Couple

The Nasonex Bee and Lunesta Butterfly have confirmed they are a same sex couple and have been for quite some time. The couple, appearing before the press last night, "came out" to the public on their own, confirming rumors about their relationship that surfaced early last summer.

The Bee and Butterfly made the announcement prior to attending the premiere of the latest Lunesta commercial at Grauman's Chinese Theater in Los Angeles.


"We want other animated images in television commercials, especially those representing the pharmaceutical industry, to know that it's okay to be gay," said the Butterfly. 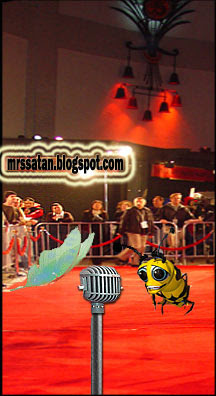 "We're happy, bzzz bzzz, and have been in a committed relationship for some time, bzzz bzzz," said Bee.

"We really want to be parents," said Butterfly, "and in the near future we're planning on adopting a Namibian child, just like Angelina and Brad."

Comments:
jesus that is funny.

thanks. glad you enjoyed.