From MPR, Minnesota Public Radio (who we know never misrepresents the facts and is always fair and balanced (bolding mine):

St. Paul school board member Al Oertwig, the district's longest-serving board member, said he would resign rather than fight claims that he viewed child pornography on a library computer.

"The allegation of child pornography is absolutely, totally false," Oertwig said, but added that he is stepping down after nearly 20 years to avoid a distraction for the district. "Whether it's true or false, it's going to be out there for months," he said. [So why resign if the charges are false? Methinks he doth protest too much. Way too much! - Drake]

By Thursday morning, Oertwig had sent an e-mail saying he intended to resign immediately to the board chairman, said district spokesman Casey Mahon.

However, by law to resign a board member must submit a signed letter and the board must vote to accept it.

Mahon said the district hadn't yet received the letter. The board's next scheduled meeting is May 15.

Oertwig, 62, has not been arrested or charged with a crime.

The security officer saw the man watching a pornographic video of what appeared to be three adult men and three boys, the police report said. When the officer tapped the man on the shoulder and told him to log off, the man apologized, gathered his belongings and began to leave. The officer told the man to stop, but he ran away, the report said.

Security officers linked the library identification number on the computer to Oertwig, the report said. They also obtained images of the man from security cameras, but the police report didn't say whether investigators asked the security officer to confirm the images.

Oertwig was first elected to the board in 1983 and has lost one election since: He was defeated in 1991 amid an anti-incumbency mood.

But in 1990, he used his campaign stationary to place a notice at several gay bars in hopes of attracting a renter and companion. Oertwig, who is openly gay, said at the time he never intended the notice to receive wide circulation.

He said Wednesday that having to respond to stories like the one about the rental notice had drained him.

"Because I've gone through too much, I'm simply not going to fight again," he said. "I'm just tired of being unfairly attacked."

Have I mentioned that Al Oertwig is a Democrat? Yep, he is.

Want to learn more about Al? Why, you can do so right HERE.

This isn't the first time Oertwig has made the news. Not long ago many of his colleagues and other professional people in the educational system questioned his odd schedule and odd hours of his school board position. It seems Al liked to work the graveyard shift...doing all sorts of (ahem) school business in the wee hours of darkness. Why, one could make the leaping conclusion that that's a great time of the night to cruise for young homeless boys. But I'm not saying that, nope, not me.

Have I mentioned Al is a Democrat? Did I mention that somewhere above? Well, if I didn't, I just want to mention that Oertwig is a Democrat. Apparently one with a fondness for underage boys. But maybe not...I'm sure he has nothing but the very best intentions for all the students. Especially the boys between ages 12-16. 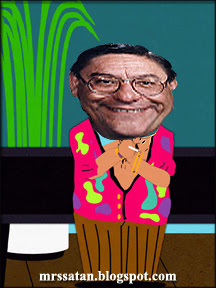 "Super, thanks for asking! Say, can I borrow your library card? I need to log on to their public computer?"