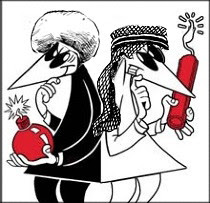 "Islam vs. Islamists"
PBS - Public Television, you know, the one that is taxpayer funded - has cancelled the broadcasting of "Islam vs. Islamists". Usually PBS has no qualms airing programming that rhetorically asks such questions such as, "was Jesus married to Mary Madalene and did she give birth to his child". But...for some reason...fair and balanced PBS has dropped all plans to air "Islam vs. Islamists" (all bolding mine):

"Islam vs. Islamists" focuses on the courageous Muslims in the United States, Canada and Western Europe who are challenging the power structure in virtually every democracy that has been established largely with Saudi money to advance worldwide the insidious ideology known as Islamofascism. In fact, thanks to the MacNeil-Lehrer film, the PBS audience will shortly be treated to an apparently fawning portrait of one of the most worrisome manifestations of that Saudi-backed organizational infrastructure in America: the Muslim Student Association (MSA). The MSA's efforts to recruit and radicalize students and suppress dissenting views on American campuses is a matter of record and alarming in the extreme.

In an exchange with me aired on National Public Radio last week, however, Robert MacNeil explained why he and his team had refused to air "Islam vs. Islamists," describing it as "alarmist" and "extremely one-sided." In other words, a documentary that compellingly portrays what happens to moderate Muslims when they dare to speak up for and participate in democracy, thus defying the Islamists and their champions, is not fit for public airwaves.

[Martyn] Burke wrote that his documentary depicts the plight of moderate Muslims who are silenced by Islamic extremists, adding, “Now it appears to be PBS and CPB who are silencing them.”

A 52-minute documentary film exploring the struggles of moderate American Muslims at the hands of their radical brethren has also become a showcase for the struggles between right and left in the news media.

The producers of "Islam vs. Islamists" say their taxpayer-funded film has been shelved by the Corporation for Public Broadcasting (CPB) and the Public Broadcasting Service (PBS) in "an ideological vendetta," and because the production team includes conservative columnist Frank Gaffney Jr., founder of the Center for Security Policy.

The controversy involves a collection of documentaries financed with $20 million in federal grants from the corporation, which conceived Crossroads in 2004 to enhance public understanding of terrorism, homeland security and other crucial issues in the post-9/11 era. Independent filmmakers submitted 430 proposals. Full production grants were given to 21 of those, including Islam vs. Islamists, which received $700,000.

Subtitled Voices From the Muslim Center, Burke says his film "attempts to answer the question: ’Where are the moderate Muslims?’ The answer is, ’Wherever they are, they are reviled and sometimes attacked’ " by extremists.

Michael Levy, a spokesman for CPB, said the corporation set up the Crossroads project and provided funding, but turned over management and content control to PBS and WETA 13 months ago.

After that, Burke says in his Feb. 23 complaint letter, he "consistently encountered actions by the PBS series producers that violate the basic tenets of journalism in America."

Let me repeat that last sentence because it's so worth repeating: "PBS officials turned down interview requests." I don't need to add any additional commentary. PBS has said it better than I ever could.
©2007