So Mitt Romney says he's been a lifelong hunter and it turns out that others claim he in fact has only been hunting twice.

That's still one more hunting trip than John "Can I git me a huntin' license here" Kerry has been on. Kerry, you may recall, is rumored to have served in Vietnam, claiming War Hero status for having twice self - fragged himself.

And of course we have MrsSatan who claims to be a lifelong duck hunter. 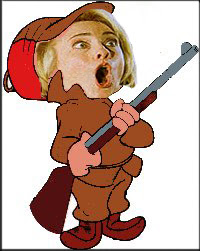 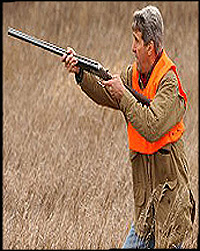 Have been a duck hunter...

And claims that she once tried to enlist in the Army but was turned down because she was too old.

And HERE, "war hero" Kerry tells those of us who have actually been deer hunting that his successful and secret deer hunting strategy is to "crawl around the woods on his stomach":

"I go out with my trusty 12-gauge double-barrel, crawl around on my stomach. I track and move and decoy and play games and try to outsmart them. You know, you kind of play the wind. That's hunting," [said Kerry].

Kerry's claim that he crawled around on his stomach, "playing the wind," in pursuit of deer that stirred up the most suspicions.

To the NRA's executive director, Kerry's description was "so utterly bizarre" it made him "wonder whether Kerry has ever hunted a deer in his life." Anyone thinking of trying his deer-hunting tactics should "at least wear some blaze orange" so other hunters don't confuse him with "a snake slithering through the brush." And then there's Mark Steyn. Neither he nor "any of his New Hampshire neighbors" had "ever heard of anybody deer hunting by crawling around on his stomach, even in Massachusetts. The trick is to blend in with the woods and, given that John Kerry already looks like a forlorn tree in late fall, it's hard to see why he'd give up his natural advantage in order to hunt horizontally."

If you believe MrsSatan is a duck hunter and that John Kerry has gone deer hunting - especially pursuing a big, 14 point buck by crawling around on his stomach while he tries to "outsmart" the deer - I have a lovely bridge to sell you that is located in Brooklyn. It's a pretty bridge and I have the deed and title to it. Really, I do.

Comments:
Romney is not the only politician to die on a mole hill. See links at http://terriermandotcom.blogspot.com/2007/04/mitt-romney-fires-aims-and-flip-flops.html

I'm not sure what you mean, even after reading your link.

At least Romney never claimed to invent the internet and doesn't deer hunt by rolling around the woods on his stomach.

yeah, shooting varmints is target practice, not true hunting. But's it fun. If we could only do the same with Liberals...