This Post simply deserves a sequel. If you don't care to click on that link right now, I'll recap what it's all about.

The 'Man Who Wouldn't Be King', John Kerry (who, in case you didn't know, served in Vietnam) claims that in the past he has gone deer hunting. Kerry said that the tactic he uses when he deer hunts is to "crawl around on my stomach. I track and move and decoy and play games and try to outsmart them. You know, you kind of play the wind."

Incredulous as it may seem, few media outlets other than NRO questioned Kerry's claim of hunting tactics of him "crawling on the ground" as a time-tested and proven method of deer hunting. 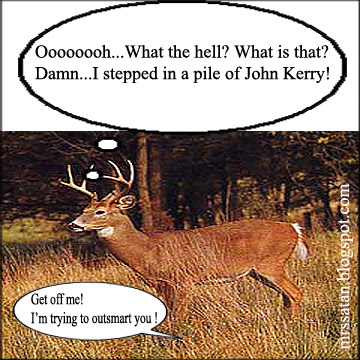 I've been deer hunting dozens of times but I don't pretend to be an expert on the subject. Although I have not been hunting in the past five or six years, prior to that, I deer hunted almost every season. My brothers and my late dad spent their share of time deer hunting as did several of my uncles, my cousins and my friends. None of us, upon hitting the woods, ever dropped to our stomach crawling around in search of a great 18-point buck.

I don't know what game or wildlife Kerry thinks he's going to get by crawling around the woods on his stomach. Snipe, maybe?

Normally, deer hunters want to be above the landscape, not below it, which is why deer hunters build what is called a deer stand up in a tree. It's usually nothing more than a small, secure, often wooden platform constructed onto a large tree or by connecting the platform between two trees. The platform need not be any larger than enough to plant one's butt on, but some hunters do indeed build some more elaborate and larger scale deer stands. The reason for this is to be above the ground, above the "action". Other hunters in the party will slowly pace themselves through the woods in the direction of the hunter in the stand, thereby "driving" the deer towards their co-hunter perched above who can get a good, clean shot at a moving (i.e. running) deer. 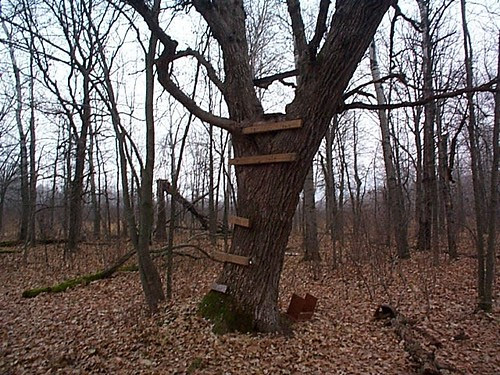 Hunters build a ladder, nothing more than weight-bearing pieces of wood, perhaps 20 inches long by 6 inches wide, by nailing these strips of wood into the tree that enables them to climb up into the stand. There's also pre-manufactured ladders and deer stands that are sold by the likes of Cabella's and Fleet Farm among other retailers. So for those who prefer not to bother building a deer stand and ladder, these items can be purchased ready-to-go.

My deer "stand", which was constructed by one of my brothers, is a semi-enclosed fixture that sits on the ground. Its dimensions are approximately 6 feet wide by 6 feet long and 5 1/2 feet high.

The "walls" have a cut-out openings to shoot through that runs about a 240 degree span, meaning the only full and non-cut-out "wall" is to my back. If it had running water, electricity and plumbing...hell, it'd be like a mini-condo. There's been times during deer hunting when it's been so cold I had a mini-propane heater in there with me keeping me toasty warm. It overlooks a considerably long and lengthy ravine that is a known deer path so I can look down upon it, as well as left and right, to any approaching deer.

While some people - like Kerry - can use their "trusty 12-gauge double-barrel" for deer hunting, it's usually not the gun of choice for deer hunters because its bullets don't have the range that you'll get from using a 30-30, .223 or a 30-06. Often, deer hunters mount a scope on their rifle for accuracy because when you're shooting at a deer that is fifty or one-hundred yards away you want to choose a rifle and ammo that will carry over that yardage. Your average 12-gauge shell - buck shot or slug - doesn't have the velocity or power (i.e. its shorter range) that you will get with rifle ammo.

For Kerry to claim that his deer hunting technique is to "crawl around on his stomach", trying to "decoy and play games" and "outsmart" the deer is laughable and preposterous. Nobody I know deer hunts using the Kerry method. Nobody.

A hunter doesn't outsmart a deer, they're pretty intelligent creatures. At best, a hunter may surprise a deer or rouse one up by startling it. Another manner, especially if you are deer hunting alone, is to sit as motionless as you can in a deer stand and simply and patiently wait for a deer to walk into view. The other method, as I noted above, is to have some members of the hunting party "driving" deer, hopefully in the direction of where other members are perched up high in their stands. That's pretty much how one fills their deer license.

The NRO Article on the Great Hunter Kerry is required reading for all sportsmen and sportswomen. His approach to deer hunting is a small part of the story. His tall tales of prowess in hunting other game is equally specious.

I doubt that Kerry has ever, really, truly been hunting - other than hunting for a wealthy widow or a vote. Maybe Kerry once had a dream that he'd gone deer hunting and he convinced himself it was real. Maybe, in the dream, he used one of those guns that when you pull the trigger a little flag pops out from the barrel that reads "BANG" and he felled the deer. Yeah...it had to have happened that way.

Comments:
David, I have nominated you for the "thinking blogger" Award.

THANKS Bob - I am honored and flattered.

I just read your link and will post a similar "5" in the next day or two - time is a bit limited the rest of today and perhaps tomorrow but I will get to it.

Thanks for nominating me. I'm glad you think enough of what I do here to do so.