John Edwards: Who Is Your Moral Leader? 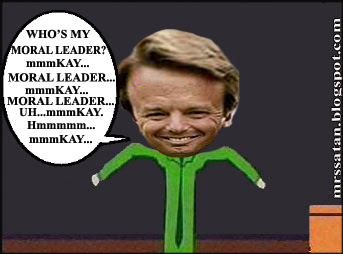 In last night's Democrat Debate in South Carolina, John Edwards was asked the following question: "Senator Edwards who do you consider to be your moral leader?"

Whoa - one of the easiest lobbed softball questions for anyone to answer, especially a politician. Easier than having to answer, "what's your favorite color."

And how did Edwards respond?

He first went into panic mode as his eyes darted about in a desperate attempt for his brain to invent an answer.

Panic mode led to TWELVE SECONDS ( some say NINE seconds ) OF DEAD SILENCE before he could stammer out his answer, "My Lord. I go to him in prayer every day." (uh, no you don't, John).

If Edwards does indeed "go to his Lord and pray every day," then why did it take him so long to fabricate his answer?

Remember John, the Lefties whose vote you're trying to court don't care much for "the Lord" or Jesus. Instead you might want to offer them free abortions.

Comments:
Great post, I am sharing it on the Mitt Report.

Great site by the way, please keep in touch.