"'Auntie Remus And Her Legends of The Old Plantation' is sure to be a big hit! As heartfelt as her 'It Takes A Village', in her new book Hillary relates her personal stories about growing up as a poor black girl in the ghetto while fighting racism and prejudice at an all-white high school."
- New York Times Book Review

"Another huge, best-seller."
- Her publisher

"I ate it with Grey Poupon and it was good."
- Michael Moore 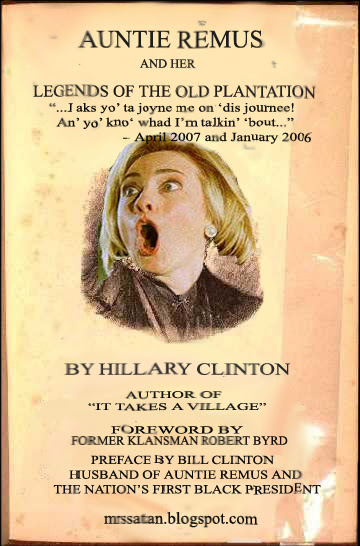 Even the sacred, Liberal Sceptre of Talking Points, the New York Times, is critical of the Southern Accent pandering from Mrs. Clinton:

At times today, Mrs. Clinton’s slight, flat Midwestern accent dissolved in a cadence-laden speaking style that is more associated with a Southern Baptist minister (or her husband) than with her. Sometimes it was the “g” at the end of a gerund that disappeared, like “runni’” instead of running. Sometimes her voice went soft at the end of sentences.

She has spoken like this to black audiences before, most memorably at a black church in Selma, Alabama, this winter when both she and Mr. Obama were in the town to commemorate a civil rights anniversary. Mr. Obama, who usually speaks without an accent, sometimes displays a similar lilt as well, and Mr. Edwards’s North Carolina accent sometimes sounds much sharper than at other moments.

-
Give a listen to yet another in a long list of affectatations of accents Auntie Remus has to offer whomever the crowd is she is speaking: