As the old song goes:

Why...I don't see Jesse Jackson and Al Sharpton in Minneapolis bringing aid and comfort to the 18-year old rape victim. Why is that? Where are 'ya, Jess...Al? 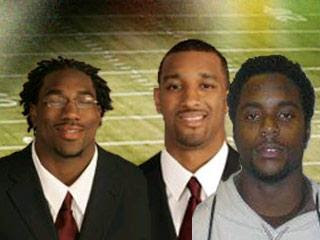 If the Gopher football players were white, Jesse "Hymietown" Jackson and Al "Tawana Brawley" Sharpton would be in Minnesota, but since the players are not white...well...the two "Reverends" will have to spend their time on Don 'The Fossil' Imus' issue.

We all remember EX-Congressman Cynthia McKinney saying the only reason she was detained entering the Congress building was not that she wasn't wearing her Congressional pin, but "because she is black."

For all we know, the above three Gopher football players may indeed be innocent of the alleged rape charges. I hope they are innocent - I've heard from a couple of college friends who tell me they are not the type of gentlemen who would engage in the behavior that is alleged of them. The investigation into the charges against them is nowhere near complete.

Isn't it time the "Race Card" be put aside, permanently and forever? Except, what card in their deck would the Liberals have to play?

Comments:
I don't know who your friends are that say they aren't the 'type' to commit a rape. The reality of sexual violence is that there is no 'type'. I can say this much: I know the facts, from the inside, and there is plenty of evidence. Unfortunately, there is more power behind the UofM Athletic Department than anyone can imagine. And, nowhere near the same level of support and money behind the 18 year old student - no one is putting pressure on the county attorney to do the right thing. If he did, it wouldn't be any more difficult a case to charge than the many other sex assault cases that go through his office.

I wrote what I'd heard from friends, who said the accused were not inclined to this behavior. I did not imply or suggest that that is the reality. If they are charged and found guilty, by all means let justice take it course.

I COMPLETELY agree with you, seriously - I do, on the UofM AD having more political power and clout than anyone can imagine. Of this I have no doubt.

Thanks for commenting and visiting.