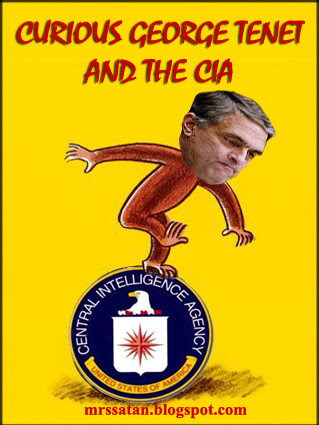 Tenet is now in the headlines due to his soon-to-be-released book where he is critical of President Bush, Vice President Cheney and the handling of the Iraq War.

This is the same George Tenet who told Liberal journalist Bob Woodward that ousting Saddam Hussein and the Iraq War would be a "slam dunk". These days, Tenet claims his "slam dunk" words are being distorted. Distorted by the Liberal-Leaning Bob Woodward? No......that can't be.

This post is not to rip Mr. Tenet or his service to our country, but there are many inconsistencies in what he is saying today compared to what he has said in the past.

These days, Tenet is saying some rather unusual things: NPR:

- the Bush administration used him as a scapegoat over intelligence issues with the war in Iraq.

- his comment on Saddam Hussein possessing weapons of mass destruction being a "slam dunk" was taken out of context by the administration.

- Tenet told CBS, "The hardest part of all this has just been listening to this for almost three years, listening to the vice president go on 'Meet the Press' on the fifth year of 9/11, you know, and say, 'Well, George Tenet said slam dunk.'"

"I know that this program has saved lives. I know we've disrupted plots," Mr. Tenet said in a "60 Minutes" interview set to air Sunday before the release of his new book. "I know this program alone is worth more than the FBI, the Central Intelligence Agency, and the National Security Agency put together have been able to tell us," he said.

Mr. Tenet, who led the CIA between 1997 and 2004, defended the aggressive interrogations as appropriate to deal with figures such as the reputed mastermind of the 2001 attacks, Khalid Sheikh Mohammed.

Tenet also says “I do know one thing in my gut,” Tenet writes in his upcoming book, “Al Qaeda is here and waiting.” By "here" he means the United States. I believe him. If his words do not cause The Left to be concerned about terrorism, well, then nothing will - until the U.S. experiences another attack on the scale or greater than September 11, 2001.

It almost seems as if Mr. Tenet is attempting to give his legacy a makeover with his book, trying to "soften" his past statements about Iraq.

Let's not forget a few things that Tenet said in the past. Let's review, shall we?

The Clinton Administration was still in power at the White House, the election not to come for another nine months.

In February 2, 2000, Tenet gave the following testimony before the Senate Select Committee on Intelligence on the topic of The Worldwide Threat in 2000: Global Realities of Our National Security: (bolding mine)

Mr. Chairman, nowhere has the regional threat been more dramatically played out than in South Asia. Both Pakistan and India have intensified their missile and nuclear rivalry. Further nuclear testing is possible and both states have begun to develop nuclear-use doctrines and contingency planning. This is a clear sign of maturing WMD programs. I will discuss South Asia's broader problems later in my briefing.

Mr. Chairman, another sign that WMD programs are maturing is the emergence of secondary suppliers of weapons technology.

While Russia, China, and North Korea continue to be the main suppliers of ballistic missiles and related technology, long-standing recipients—such as Iran—might become suppliers in their own right as they develop domestic production capabilities. Other countries that today import missile-related technology, such as Syria and Iraq, also may emerge in the next few years as suppliers.

Over the near term, we expect that most of their exports will be of shorter range ballistic missile-related equipment, components, and materials. But, as their domestic infrastructures and expertise develop, they will be able to offer a broader range of technologies that could include longer-range missiles and related technology.

* Iran in the next few years may be able to supply not only complete Scuds, but also Shahab-3s and related technology, and perhaps even more-advanced technologies if Tehran continues to receive assistance from Russia, China, and North Korea.

Mr. Chairman, the problem may not be limited to missile sales; we also remain very concerned that new or nontraditional nuclear suppliers could emerge from this same pool.

A major worry is that Iraqi reconstruction of WMD-capable facilities damaged during Operation Desert Fox and continued work on delivery systems shows the priority Saddam continues to attach to preserving a WMD infrastructure. And Iraq's conventional military remains one of the largest in the Middle East, even though it is now less than half the size during the Gulf War.

* He can still hurt coalition forces, but his military options are sharply limited. His continuing challenge to the no-fly-zone enforcement remains his only sustainable means of engaging US and UK forces.

With regard to Iraq, Saddam faced a difficult start in 1999—including the most serious Shia unrest since 1991 and significant economic difficulties.

* The Shia unrest was not confined to the south but also affected some areas of Baghdad itself, presenting Saddam's regime with a major security problem. On the economic side, to rein in inflation, stabilize the dinar, and reduce the budget deficit, Saddam was forced to raise taxes, ease foreign exchange controls, and cut nonwage public spending.

Saddam has, however, shown himself to be politically agile enough to weather these challenges. He brutally suppressed the Shia uprisings of last spring and early summer. The regime is still gaining some revenue from illegal oil sales. Increased access to food and medical supplies through the oil for food program has improved living conditions in Baghdad.

And, what I consider to be some of his most eye-opening revelations:

Over the next 15 years, however, our cities will face ballistic missile threats from a wider variety of actors—North Korea, probably Iran, and possibly Iraq. In some cases, this is because of indigenous technological development, and in other cases, because of direct foreign assistance. And while the missile arsenals of these countries will be fewer in number, constrained to smaller payloads, and less reliable than those of the Russians and Chinese, they will still pose a lethal and less predictable threat.

* North Korea already has tested a space launch vehicle, the Taepo Dong-1, which it could theoretically convert into an ICBM capable of delivering a small biological or chemical weapon to the United States although with significant inaccuracies. Moreover, North Korea has the ability to test its Taepo Dong-2 this year; this missile may be capable of delivering a nuclear payload to the United States.

* Most analysts believe that Iran, following the North Korean pattern, could test an ICBM capable of delivering a light payload to the United States in the next few years.

* Given that Iraqi missile development efforts are continuing, we think that it too could develop an ICBM—especially with foreign assistance—sometime in the next decade.

These countries calculate that possession of ICBMs would enable them to complicate and increase the cost of US planning and intervention, enhance deterrence, build prestige, and improve their abilities to engage in coercive diplomacy.

Tenet appears to want to distance himself from his words, to not accept that he was part of the decision-making process in going to war with Iraq. We've witnessed the revisionism of statements and votes made by elected politicians ("I voted for it before I voted against it.") and now it seems we have Mr. Tenet wanting to slink away from his own words and actions.

Tenet wouldn't be just another in a long line of those who blame Bush, would he?

Thanks for the referenced item, Anonymous. But that was a site (among others, no doubt about it) that reported - according to a retired Russian General of official that the U.S. and UK would begin bombing Iran on Good Friday ..... and that didn't happen.

On the other hand, with what just happened in Saudi Arabia with 172 some terrorists detained and arrested, who knows - maybe the planned assault on the West was stopped or greatly reduced by the Saudis?

What do you think?