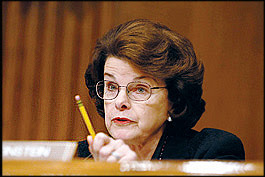 DemocRAT Diane Feinstein, above, demonstrates holding a pencil that one of
her husband's defense contracting firms charged the Pentagon $71,735.89.

We have another in a long, long line of hypocrisy from the Liberals. Oh, the Libs can howl and scream, pointing the finger at Bush and Republicans in general for deficiencies at Walter Reed Hospital - some of the criticism warranted.

Now we find out that at least two years go Ms. Whinestein was aware of problems in medical care of Iraq War Veterans:

Two years ago, before the Washington Post became belatedly involved, the online magazine Salon.com exposed the horrors of deficient medical care for Iraq war veterans. While leading MILCON, Feinstein had ample warning of the medical-care meltdown. But she was not proactive on veteran's affairs.

We also learn from the above story that Whinestein's husband, "Richard C. Blum's ownership of two major defense contractors, [were] awarded billions of dollars for military construction projects approved by Feinstein."

APPROVED BY FEINSTEIN! Do you GET THAT, Libs? Does the significance of that sink into your feeble, wee brains? (No, of course not...)

The appearance of impropriety on the part of the Whinestein is evident, to say the least, if not outright unethical and perhaps illegal. This reeks of the same type of stench as the no-bid defense contracts awarded to 'Kit' Murtha, brother of Democrat Congressman John Murtha.

Democrats and Liberals will refuse to make an issue of this and will retreat into their bubble of supreme denial because this affects their party instead of the Republican party.

Another fine and stellar example of Liberals holding others accountable and responsible to a standard that they will not ever apply to themselves.

Another fine example of "Hypocrisy, Thy name is Democrat."

Where's Cluck Schumer calling for an investigation of Whinestein, Blum and Murtha? Notably - but not surprisingly - dead silent and mute. Whew - good thing this isn't a Halliburton "scandal"!