From The Chicago Sun Times (which often pulls the URL after a few days):

Obama is very sensitive about his press. After his press conference, he headed toward New York Times columnist Maureen Dowd and chided her -- in a kidding way -- for a comment in the 12th of 14 paragraphs in an Oct 21 column. She wrote that Obama's "ears stick out."

"I just want to put you on notice," he said.

"I was teased relentlessly when I was a kid about my big ears."

You know ... I am sooooooo the wrong person to know this information. Chide? Oh, hell damn, I'm gonna rip him every chance I get now! 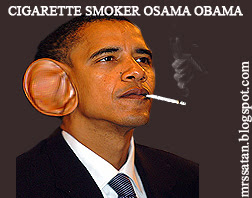 Comments:
Heh. Great picture of The Rock Star.
I borrowed it, and linked here

no problem on borrowing the image, nuke. i'm honored that you liked it enough to do so...so thank you!

Good old fashion American ignorance and xenophobia that the Left has for W. How 'bout that?!???!

Why so glum John Jake? Are you a Obama supporter who doesn't like to see his favorite candidate make a little fun of? The Left never does that, do they?