So...anything newsworthy happen in the last week or so?

Below is an interesting item from the very fine American Spectator.


It would appear that Nancy Pelosi, in 2001 - just five years ago - marched in a Gay Pride Parade where another fellow marcher was, "Harry Hay [who] was a fierce advocate of man/boy love."

Yeah...how about that? Did Nancy Pelosi, as she does today with Mark Foley, condemn the beliefs of Mr. Hay?

If Representative Pelosi took the time to condemn Harry Hay's presence in the Pride Parade, there is no evidence that I can find. Nor did she refuse to march in the parade as a protest of Mr. Hay. Nor did she issue a statement warning parents that they were bringing their kids to a parade where Mr. Hay was one of the featured attractions.

What Representative Pelosi chose to do instead -- as did much of civic San Francisco -- is blithely give a wink-and-a-nod to ole Harry and his interest in little boys.

Oh, you know those Liberals and their Double Standards!

Ms. Peloshit participated in a parade where at least one of her co-marchers included someone who advocates adult-child sexual relationships and...Ms. Peloshit said nothing! I wonder why that would be? Do you suppose she put her Liberal Political Agenda ahead of those good, old-fashioned Democratic Family Values?

Harry Hay was a fierce advocate of man/boy love. While The [San Francisco] Chronicle simply ignored Harry's views, the North American Man/Boy Love Association was only too delighted to put up a collection of Harry's views on the need for young boys to have older men as sexual partners. Here's just a sample taken from a talk at a New York University forum sponsored by a campus gay group in 1983.

Said Harry: "Because if the parents and friends of gays are truly friends of gays, they would know from their gay kids that the relationship with an older man is precisely what thirteen-, fourteen-, and fifteen-year-old kids need more than anything else in the world."

"More than anything else in the world." ...in the World? Whew, that's an incredible statement to make. And Nancy Peloshit marched in the same parade with the man who spoke the above words. Good Old Fashioned Democratic Family Values! Right?

Don't try to sell me that a politician as politically savvy as Ms. Peloshit didn't know with whom she was marching. 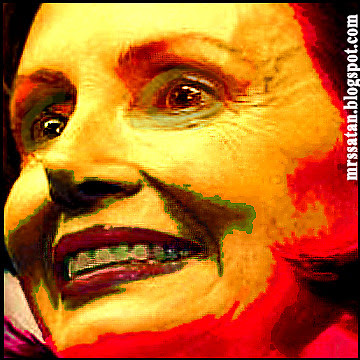 It's not Denny Hastert who should resign his post, not by any means.

It is Nancy Peloshit who needs to resign, ASAP. And she certainly has some 'splainin' to do about her tacit support of someone like Harry Hays.

Comments:
I'd love to find a video of Pelosi marching along with NAMBLA at that parade.

After a week of Democrats trying to claim THEY care more about protecting children, a little perspective before the election would be GREAT!

Let the voters decide whether they think that the GOP, as imperfect as it is, is a better protector of children and family values than the people who march with pedophiles and call it "Pride."

That would be great footage for a future political opponent to have of her, wouldn't it ?

Thanks for visiting and commenting, Mike!