The Kimmy And Madeline Show 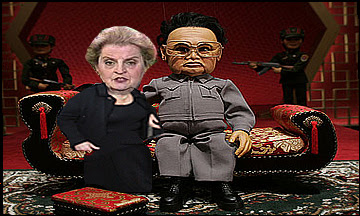 Kimmy: Did I impress you with my big nu-cree-ar mis-sirah test, Maderrrine?
Madeline: Everything you do impresses me, my little buttercup!
Kimmy: I not you ritter burrercup! I want wor-rod to fear me, not rike me!
Madeline: You're my bad little boy! More tea?
Kimmy: Fruck tea! I want resprect! I just as evirrrr as that ritter short guy in Iran!
Madeline: You mean Ahmadinejad?
Kimmy: Wha-ever, wha-ever! He onry make big name for himserrf because he say Horocaust never happen! He say that, worrrd go crazy and pay no attention to me!
Madeline: Maybe you need to stop trying so hard to seek attention.
Kimmy: What!? Who side you on? I pay you off during Crrrinton years, wine and dine you, and now you say I try too hard to be madman? Kimmy growing sus-pee-shous of his riddle Maderrrine!
Madeline: Oh come on, now...you know the Clinton Shadow Government still supports you. We just have to wait until 2008 when Hillary steals the White House. Then we can start paying you off again.
Kimmy: 2008 too rong to rait. Besides, Kimmy don't know if he can trust Hirrrrrarrrrrrry. She, how you say...real bitch!
Madeline: She's a wonderful Commie, just like you. Say, this fondue is terrific. What is it?
Kimmy: I don't know. Probabry fried stray dog with Verveeta cheese. Now, how Kimmy get back on worrrd stage as Numba One Threat?
Madeline: You leave that to me and the rest of the Clinton Shadow Government. First we have to do all we can with this Mark Foley scandal.
Kimmy: That another thring! U.S. press pay more attention to Mark Forrrrey than Kimmy! Time to do another nu-cree-ar mis-sirah test! I no care what you say, Maderrrine!

The First Kimmy And Madeline Show is HERE