The Mantra from the Left these days on North Korea's missile launching and bomb testing is an endless repetition of "Clinton had cameras and Inspectors in North Korea." Well, we all know that no one, let alone a Communist country, could possibly avoid and evade prohibited activities and wrongdoing because of surveillance cameras and inspectors. Hot damn, you put up a camera and toss in an inspector or two, and all illegal activity ceases. This is why banks and convenience stores are never robbed. This is why crimes are never committed in areas where surveillance cameras and guards are present.

Which administration sold reactors to North Korea? Clinton and Company.

Who proposed her very own toast to the leaders of North Korea? Madeline Albright!

Face it, dictators, enemies of democracies and lunatic leaders seeking all kinds of weaponry flourished during the weak leadership of the Clinton years. Kimmy Jong Il, Hussein, Hezbollah, Hamas and all the other terrorist factions knew they could get away with practically anything and face no repercussion from the United States because of Clinton's ineffectiveness and his obsession with his own popularity.

The fact that Lefties refuse to even consider that the Clinton Administration could possibly have dropped the ball somewhere - anywhere - is remarkably revealing and indicative of their blind allegiance to a political agenda rather than anything factual.

Is there anything at all in foreign policy or domestic issues that Clinton may not have gotten right? Did he make any mistakes at all? According to you Lefties the answer is no, he did everything right and his administration never erred. You're in the deepest and most full-blown stage of physiological and psychological denial. It would be humorous and amusing if the stakes weren't so high.

The Left ties the hands of our military by politically insisting that they fight a "kinder, gentler war" in Afghanistan and Iraq. Then they bitch about it two and three years later by saying "we didn't go into those countries with enough force and power." Had the U.S. and its Allies gone into Afghanistan and Iraq with the force that the Left today claims we should have, they then would have bitched that we're going in with overkill and heavy-handedness. 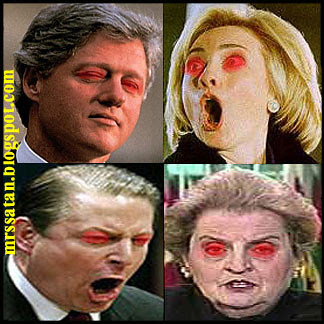 The Four Enablers of The Apocalypse

While the convenience of selective memory loss possessed by the Insane Liberal Clown Posse allows them to rationalize that "Clinton great-Bush bad", those of us with even the slightest degree of objectivity know better than to buy into their propaganda.

If the Clinton Administration's record on any issue is so perfect and was so flawlessly executed, able to stand the test of time and stand up to criticism, then why does the Defend Clinton Crowd come to such a loud and vocal defense every time it's criticized? Is the Clinton Administration and its eight years of policies exempt from review, examination and reevaluation? The Left sure seems to think so, don't they?

Bill Clinton refused to make hard and complicated decisions. His corrupt Crime Family put cover-ups and subterfuge at the top of their list of priorities. So Celebrate Weakness! For this is all the Left offers. And this perceived weakness, of which Bush works to change and correct, is what feeds countries like North Korea, Iraq, Iran, Syria, Afghanistan and terrorist groups like Hamas, Hezbollah.

(Make sure to ask yourself who occupied the White House during the bolded dates above!)