The Path To Censoring ABC 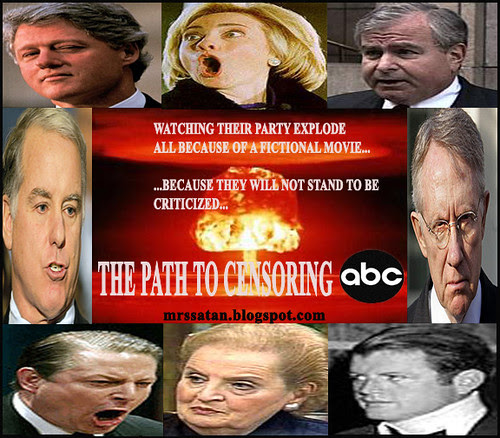 A docu-drama, "The Path To Censoring ABC", portrays a
White House Administration Cast of Characters comprised of
Crooks, Law Breakers, Sociopathic Liars and their Sycophants,
who are all about enriching themselves and their place in
history, and their attempts to censor a television network.

Nevada Senator Harry Reid calls for ABC-TV to "pull' the broadcast of "The Path To 9/11" but yet when CBS bowed to pressure and pulled their mini-series of The Reagans, his partner, former Minority Leader Tom Daschle called CBS's decision to pull the show "appalling."

Actor Harvey Keitel, who stars in the mini-series says, fictionalized material and dramatic license should be representative of the subjective truth of a political party, while his co-star, Donnie Wahlberg, says, the mini-series treats both sides fairly and, "[we] were careful not to make one side look bad."

Many Lefty Blogs are criticizing some Conservative Bloggers for their opposition to the aborted CBS Mini-series, "The Reagan's". Well, I wasn't blogging then so you won't find any of my words saying, "CBS shouldn't broadcast this..."

Run the programs. As long as the network tells the viewers it is presenting a DOCU-DRAMA and NOT a documentary there is a magnificently designed technological wonder that many tech-oriented people forget about. It's called the "OFF" button, on your television or remote. You can also change the channel. No one is forcing you to watch a FICTIONALIZED DOCU-DRAMA.

But trying to CENSOR ABC so others cannot view "The Path To 9/11", why, don't China and North Korea do censorship like that? Someone should tell that to the Lefties.