The spoogefest in London ramped down today, wrapping up a weekend of weary wacky Wankathon waggers.

The Thon has its roots here:

The Masturbate-A-Thon is the brainchild of two American sexologists, Dr Carol Queen and Dr Robert Lawrence, and has run in the US for the past six years raising over $25,000 for women's health initiatives and HIV prevention, education and treatment organisations. This event will also benefit HIV and sexual health charity Terrence Higgins Trust.

I wonder how many people shook hands with the participants after they, uh, were done "contributing" to the charity?

I like the headline from the story in the Guardian, Dozens Join Hands-On Event, (Hands-on...):

Participant Neil Crawforth, 28, left his wife at their home in Cambridge while he came to do his thing. 'I'm not a good swimmer and I can't run very far, but this is something I can do for charity,' the software engineer said.

Neil did the five-knuckle-shuffle for Charity, good for him!

The Guardian story tells about one lone protestor:

I think he has a point. Should young children be exposed to the coverage of an event like this one? Can't we agree that there are some issues that children who are too young to understand, don't need to know, hear or read about?

All in all, events that raise money for charities are a good thing. We may disagree on the nature of the event and how it's publicized. Nor do children need to be made aware of, or exposed to, the more risque specifics of the event.

By the way, did Bill Clinton participate in this charitable event? I'd think he'd be the first one in line to...ummmm .....errr...want to ...contribute to the cause. 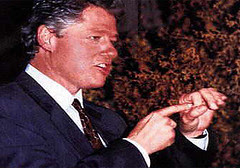 The Ex-Ejaculator/President, Bubba attends the WankAThon: "You don't happen to have a blue dress I can use as a target, do you? And can I have me some of them Cadbury Shortcake Biscuits, now?"