And in breaking news, it has been discovered that Mars also has booze.

Rumors are circulating that ...Robin Williams ... has been sighted on the red planet. 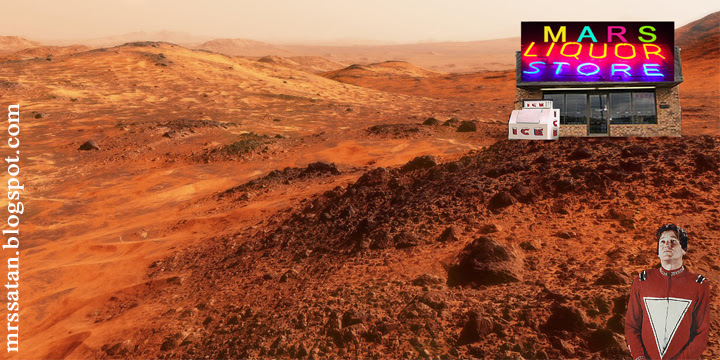 Comments:
I hear Jupiter has the olives and Saturn has the swizzel sticks! I love it!

OK, dude. Did you run out of ideas, or motivation? Me and probably a few others rely on this thing daily for a few laughs.

Robin Williams - what a fruit.

But pluto has the glasses and Venus has the Boo... Adult beverages.

Could it be a bad thing that Pluto has lost its planetary designation?

Shaved Ape: Did I run out of ideas? Moi? No. Just a short break from the action. Be sure to check in for the newest series "The Adventures of Dick Weed, Democrat!" I think you'll like it.

SteamD: Downgrading the planet status of Pluto is all Bush and Cheney's fault, don't you think? They made Halliburton coerced scientists to say that to take the attention off the war in Iraq. That's my theory and I'm sticking with it! heh!

THANK YOU ALL FOR VISITING AND COMMENTING!