The Kimmy and Madeline Show

I hear rumors that ever since MSNBC axed The Maury and Connie Show they have a time-slot open for a new couple:


The Kimmy and Madeline Show 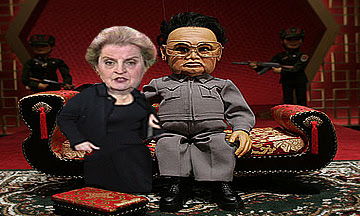 Kimmy: Why won't rest of worrd give me resprect? I'rr just as bad guy as Ahmadinejad!
Madeline: There there, my little turtle dove. I'm doing the best that I can to help your image of being a worldwide menace and an unstable tyrant.
Kimmy: Ahmadinejad, he threaten worrd with nu-crear weapons and he get arr the attention. I shoot rockets, they rand in ocean, everyborry raughing at me.
Madeline: There there, my little despot. Let's cuddle up and think of the good times you and I had in the past.
Kimmy: Those days rong gone! This new era - Era of Kimmy! Worrd wirr respect Kimmy! Worrd wirr fear Kimmy! Uh....since no dog in here, I guess that you?
Madeline: Sorry about that, I had egg salad for lunch.
Kimmy: Peeee-Yeeeeew! You stink up riving room again! I terr you take Bean-O but it farr on deaf ears. You fix gas probrems or no future for you with Kimmy.
Madeline: I know where to get you uranium and reactors...
Kimmy: Ohhh, Kimmy just joking with his riddle snookums, Maderine. You know that pookey. Now, where I put my quirt?
Madeline: It's not quirt night again, already...is it?
Kimmy: (Giggles) Every night is quirt night when Kimmy say so! Now give Kimmy some Pyongyang poon!
Madeline: I guess I just have a thing for madman dictators!
Kimmy: Kimmy been bad boy, mommer, need to be punished!

Comments:
Pyongyang poon. Howd you ever think of that! LOL