A chicken has reportedly laid an egg that has the word Allah, in Arabic, inscribed on its shell:

A chicken in a Kazakh village has laid an egg with the word "Allah" inscribed on its shell, state media reported on Thursday.

"Our mosque confirmed that it says 'Allah' in Arabic," Bites Amantayeva, a farmer from the village of Stepnoi in eastern Kazakhstan, told state news agency Kazinform.

Kazakhstan is a large, thinly populated Central Asian state where Sunni Islam is a dominant religion.

In what only can be described as extreme coincidental circumstances, my nephew sent me an e-mail of the below cinnamon and caramel roll he ordered at a coffee shop earlier this morning.

Purportedly, if you look closely at it, the roll bears a striking resemblance to the late actor Tony Randall. 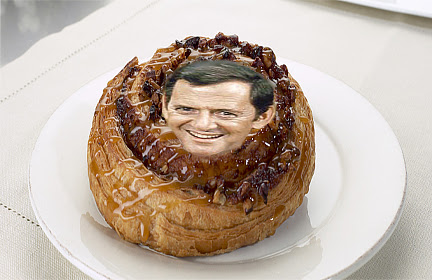 Cinnamon/Caramel Roll: Can you see Tony Randall in it, anywhere?