John Kerry, who served in Vietnam, celebrated yet another Loss Moral Victory today in the defeat Moral Victory of his Cut and Run From Iraq Bill, losing by an 86-13 vote:

But late Wednesday night, there was an hour of intense, old-fashioned debate between Sen. John Kerry, D-Mass, co-sponsor of the withdraw-by-2007 measure (which was rejected 86-13), and Sen. John Warner, R- Va., with the two men firing point, and counter-point, back and forth.

Warner played an emotional trump card - referring to the killing and mutilation of two American soldiers in Iraq this week.

He told Kerry if the Senate enacted his withdraw-by-2007 measure, the terrorists who tortured those soldiers will conclude, "We behead two and what did Congress do? It passed a law which required withdrawal by July 2007."

He lectured Kerry,"Timing in life is everything." ” 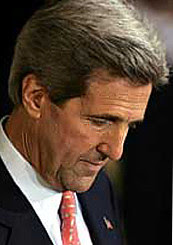 John "I served in Vietnam" Kerry, Celebrates Yet Another Loss Moral Victory

I'm relatively certain that John "has another plan" that will...well, will at some point in the future allow him to celebrate yet another Loss Moral Victory.