The death of Louis Rukeyser, 73, makes me feel ill.

Louis Rukeyser: The Guru of Investments and The Grand Poobah of Money. I loved the guy. Never met him but watched his television show religiously.

I knew he was battling cancer but I always had the thought, in the back of my mind, that he'd be back on television, seated in his leather chair, gabbing with the big rollers about investment strategy.

I'm not a big roller, hell, I'm not even a small roller. But I watched his show every week because it was the manner in how he discussed investing that made it interesting. He didn't talk about investing in its traditional terms --- he talked about MONEY, and everyone can relate to money.

A pioneer in bringing financial information and investing into peoples' homes, he was also an innovator in bringing economics and - yep, MONEY - to the every day person. He managed to put it all into terms that could be understood by anyone.

His best talent, by far, at least in my opinion, was his uncanny ability to ask his guests the same type of questions that we would ask of them - that we thought of - while we sat on the couch and watched his show.

PBS thought he was too old, too corny, and passe' and canceled his "Wall $treet Week with Louis Rukeyser" in 2002.

He returned a few weeks later on CNBC, with "Louis Rukeyser's Wall Street". I still remember the opening line of his monologue, a barb fired back at the PBS eggheads:

"As I was saying before I was so rudely interrupted..."

And his CNBC program
killed in the ratings week after week. The faux-investment show offered by PBS died a fast death. Hey - you can't defeat someone as good as Lou! 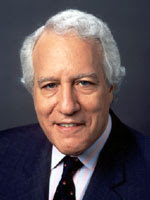 His corny puns, his annual Christmas Show presentation of gifts and gadgets, his laugh and his wink of an eye at the end of each program.

Damn Lou I miss you. Now, more than ever, because I know you won't be coming back, into my home via the television, in the future.

Others Mouring The Loss of Louis Rukeyser, and what they are saying:

Rukeyser helped to popularize the often dull and arcane subjects of economics and finance with puns that drew appreciative groans from his audience.

Once while answering a viewer's letter on investing in a hairpiece manufacturer, he said, "If all your money seems to be hair today and gone tomorrow, we'll try to make it grow by giving you the bald facts on how to get your investments toupee." 

Marshall Loeb in Marketwatch: (click the link to the Marketwatch article as MW isn't allowing a direct link)

In 1981, when I was managing editor of Money magazine, Lou pitched a freelance story to me. He was planning a trip to France and wouldn't it be great, he suggested, if he ate at least one major meal in each of the four new three-star restaurants from the Guide Michelin that he had yet to dine in?

Without much thought, I heartily agreed to the idea. What happened then was that Lou Rukeyser -- the quintessential gourmet and oenophile-- ate and drank his way up and down France at a passel of three-star establishments -- all on Money magazine's tab!

Johnny Carson was a comfort at the end of the evening. Fires, floods, scandals. Somehow, when you watched Johnny and his imaginary golf swing, you knew it was going to be okay. Louis Rukeyser gave me that feeling about money. I'm going to miss him.

"Our prime mission is to make previously baffling economic information understandable and interesting to people in general," he once said in an interview with the Associated Press.

And his home base:

Comments:
Awww Crap!! Why can't some useless a**hole like "Arec Barwin" die instead? It's always someone cool.

I really am going to miss Louis man, it's just not fair, and you know how I hate that expression.

I too am sad that Louis passed away. Hoping it had been someone else, like an actor, is a sign of a deeply troubled soul.

you know don nab? it all depends on which liberal actard dies. I am pleased to be your troubled soul.