Colorado - Hundreds of thousands of prairie dogs gathered this morning at the Denver capitol building protesting their immigration relocation and possible execution. The controversy is centered in Boulder and Broomfield counties, but its ramifications reach across all of Colorado and other states with indigenous prairie dog populations.

Carrying signs and chanting their objections, the prairie dogs are setting the tone in what may be Colorado's largest single issue since becoming a state in 1876.

The populous prairie dogs are accused of damaging manicured lawns and yards, harming groomed trails, spoiling golf courses and their bodies hosting fleas that could carry the bubonic plague. While some groups seek to trap and relocate the prairie dogs others advocate that they be executed.

DeeLynn Crisswuss, Co-Chair of the Colorado Board of Immigration said, "prairie dogs were here long before we were. It is the human race that is really the illegal immigrant and we are the ones who should be asking the prairie dogs for permission to live here."

Disagreeing with Crisswuss is Hank Spector, manager of the White Bread Private Golf Course. "These rodents are destroying the beautiful and manicured fairways and putting greens," he says. Spector says current golf course policy is to poison infiltrating and immigrating prairie dogs.

Perhaps one of the most divisive and contentious remedies involves building lengthy fences to keep prairie dogs out of areas where they are not wanted. 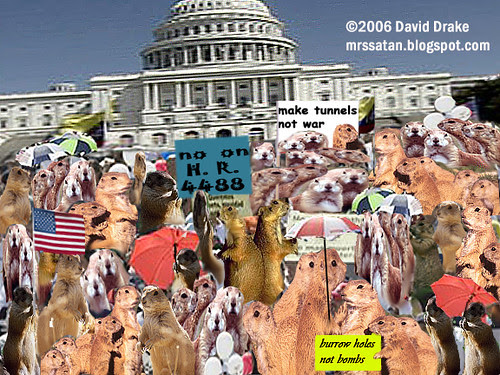 Hoppy Westburrough, prairie dog spokesdog for the prairie dogs, finds the fencing proposal downright prejudiced. "This reeks of pure bigotry. I mean, building a fence or a wall to keep us out? What's next, issuing us green cards," he asks.

Fellow prairie dog Selma Furrow agrees. "We should be free to migrate wherever we want without fear of recrimination," Furrow said, biting at her side, presumably at a flea.

Colorado State Senator Ember Reichgott-Junge, Democrat, a supporter of prairie dogs, agrees that neither relocating or executing the prairie dogs is the right answer. "This isn't the Dark Ages, the Wild West, or Berlin, Germany. The answer to this problem is, of course, spending more taxpayer money in educating the public by means of sensitivity training and enacting more anti-discrimination laws protecting the prairie dog population," Reichgott-Junge stated.

Her proposal has its opponents. "She's just catering and pandering to her constituents," counters Colorado Republican State Representative Wolfgang Von Braun. Von Braun is the author of House Bill H.R. 4488 which, in his words, will permit anyone subject to prairie dog infiltration to legally "blow their furry little heads off with a .223 caliber rifle," says Von Braun.

Lost in all the politicking is the unknown fate of the prairie dogs. Digger Branch, elder member of the Prairie Dog Coalition seems unfazed. "We reproduce like rabbits," he says. "If humans think they can contain us, remove us, relocate us, or destroy us they just don't know what we're capable of," said Branch.
©2006
- - -
Linking Here (And Thank You Kindly):
Thus I Have Spoken

Comments:
We've got Jackalopes in Kansas. Well, not really. lgp

Taking a break from plotting world domination, I gather?

As an avid prairie dog hunter and potential minuteman (if I lived in a border state) I appreciate the magnitude of the satyr, particularly the hidden nugget ot truth that is the last paragraph

So what's up with your blog? I like the title. What are you going to write about on your blog?