This past Thursday the Food and Drug Administration issued their official announcement
that marijuana has no proven medicinal or therapeutic value
. Is this a surprise to anyone? The statement by the FDA is akin to Las Vegas telling you that gambling anywhere other than Vegas is wrong.

Contradicting the FDA is a 1999 study by the Institute of Medicine that found marijuana is moderately well-suited for particular conditions such as chemotherapy induced nausea and vomiting, and of [body] wasting from AIDS. The Institute of Medicine's Dr. John Benson, co-chair for this study, noted that the Federal Government "loves to ignore our report." Of course, when is the last time your physician told you, "I can't help you, but I know a Witch Doctor who can."

Eleven states have legalized marijuana for medical use, but since it is classified as an illegal drug, the federal government - via a decision last year by the Supreme Court - is still permitted to arrest anyone using marijuana in those eleven states. What happened to "all powers not expressly reserved for the Federal Government fall to the State"? Feds, you have overstepped your jurisdiction. The only reason you can arrest these people is because the Supreme Court said you can. Had they not ruled that way, your ass would've been in a sling, and that's how the ruling on this issue should have gone.

Those who oppose legalization of marijuana, in any form, often use the tired and ineffective argument that it is a gateway drug, leading users to more dangerous drugs. What planet are you people from who believe this? The biggest and most abused "gateway drug" is already legal. It's liquor. And make no mistake, I'm in no way arguing for reviving prohibition. I know plenty of people who have gotten into arguments, fights, and not-for-the-better life-changing events because of alcohol abuse. I don't know of anybody who's gotten into those situations because they fired up a spleef or two. 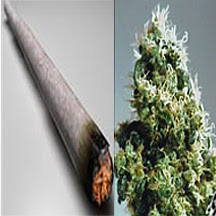 The "but liquor is legal" group falsely believes that by setting a national age limit of 21 years old, that no one will drink until that age. Yet, every day the news reports deaths due to alcohol toxicity by college students, high school students, and others well below the age of 21. Yet there are no stories about anyone who smoked a blunt and died because of it.

To reach the conclusion, over and over again, by government studies and their subordinate arms of research facilities (i.e. The National Institute of Health, the FDA, and others) that marijuana has no medical value is nothing but pure politicking from both sides of the political aisle. Plenty of politicians on both sides of the spectrum play this issue strictly on only a political basis, that marijuana is illegal and therefore it cannot have any value in the medical world while ignoring that plenty of prescription drugs have their roots in illegal drugs. Morphine is derived from poppies. A dentist can prescribe cocaine or cocaine derivatives for oral pain. Huh, how about that.

The Drug Enforcement Agency, by its own admission, is an abysmal failure at controlling the flow of illegal drugs into this country. They are lucky - LUCKY - to stop ten percent of the flow. Considering the money spent, and the funding of the DEA, this would seem by all accounts to be a gigantic financial negative. In fact, if the DEA was a private business or enterprise, it would have filed bankruptcy long, long ago. But because "the taxpayer is an endless resource of revenue" for the government, the DEA continues to live on, like an intestinal tapeworm that is never satiated. What a waste of money and manpower.

Are we to discount and ignore Grandma or Grandpa - who never in their lives sparked up a joint - who find relief from chemotherapy induced nausea by smoking marijuana? Do we tell those suffering from cancer or AIDS that even though something in marijuana appears to be working for them, say, helping keep their food down, that they no longer can use it because the FDA says it has no proven medicinal value?

As a society do we judge our compassion for those suffering from an illness, perhaps a terminal one, by determining the availability of their treatment based solely on the legality or illegality of a substance, and then deny that form of treatment to the sufferer?

I don't care what side of the political spectrum your beliefs fall, but if you cannot, at the very least, be for the legalization of marijuana for medicinal purposes, you have NO place holding elected office and you should resign as an elected official for reasons of being unable to have compassion and empathy for those who find relief with medcinal marijuana.

Comments:
Hey, man, thanks for sticking up for toking up. 'Cept for a couple of PCP mishaps, I ain't been seeing a gateway affect.

Seriously, this is a nice argument for medical marijuana - which is known to be effective for some sufferers.

I think the Republican War on Drugs is behind the new statement from the FDA. I guess every party is a little irrational.

Thanks TJ. Agree with all.