It's Time To Play: "Spot The Heckler!"

One of these women protests legitimate concerns such as Communist oppression of people, government controlled and censored media, government sanctioned murder of practitioners of religious freedom, suppression of those who attempt to practice free speech, imposes strict control on aspects of everyday life, enforces a One-Child Policy among its people, has an atrocious record on basic Human Rights, restricts its people from freely moving and relocating within its own country, represses those who dissent or criticize its government, condones low pay and long hours of labor in unhealthy and polluted conditions, endorses child labor, sponsors Reeducation Camps, and a host of other atrocities. 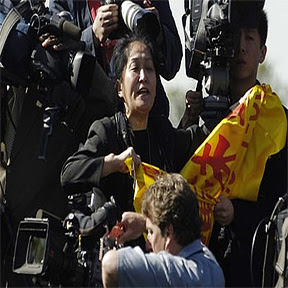 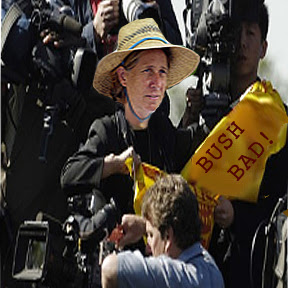 The other is just a heckler - a tool - of the LiberNazis. Can you pick which is which? I thought so!

Wang Wenyi, 47, a reporter with The Epoch Times protested visiting Chinese President Hu Jintao this morning. And she had every right reason to do so.

Cindy Sheehan, on the other hand, practices the worst kind of propaganda imaginable; being the mouthpiece of, and for, any concocted Left Wing Fringe political ideology used only for the purposes of stirring up political discourse.

Who will the Left use next, after they are finished with Cindy Sheehan?

Ya know this was an absolutely wonderful post until I had to look at that damned Sheehag again.

T.J. as always, you're welcome. You're due for a post on this blog. The Editor tells me you are at great risk of losing your Contributing Editor status.

Rev: Why bash Barbara Bush? Is your partisanship showing? If so, please cover it up, for it should not be so brazenly waved about in pubic. Uh, public.

RWR: It's always a good idea to keep a barf bag nearby when dealing with Mother Sheehan.