It's true, he does. Barack Hussein Satan Obama, Junior, worships Satan. He does the work of the Devil. Lucifer. Beelzebub. Yep, Obama worships them, though they are all representative of the same, Iblis.

What brought this to my attention is that over the Fourth of July weekend I was watching some campaign coverage on CNN. They ran footage of Obama flashing the Texas Longhorn's signal also known as the Devil's Hand Signal, also called the Sign of the Horns and also referred to as The Illuminati Hand Signal...like the one in the below photo. 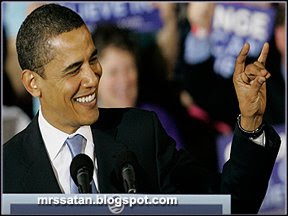 Obama is Satan or worships Satan. We know this because the Lefties tell us so. Making the hand gesture (like when it was made by Bush and Cheney) is attributed only to Devil Worship. So the same must apply to everyone right? This is what the Lefties tell us, I'm simply using their own standard.
Now, you can find all sorts of examples out on the internets where The Lefties adamantly state that when Republicans make this hand gesture, is it in honor of Satan. Why, even Bill Clinton made this hand gesture.

If the symbol denotes Texas football or UT, why are people like Silvio Berlusconi and Bill Clinton doing it too? They have no links with Texas.

Indeed, InfoWars, indeed. And the same should certainly be asked and explained why Obama, with no links to Texas football or UT, would be flashing the Illuminati and Devil's hand sign.

So the question - and answer - using the same Liberal methodology is that yes, of course Obama is owned by and answers to The Devil. Otherwise Obama would never had made such a hand gesture. Liberals are never wrong about this sort of stuff. Trust me.

Comments:
Yeah, but when Billbo made that had gesture, he was calling for more hookers. Fraudbama wasn't signaling for anything with that hand gesture. That was his imaginary childhood friend, Mr. Bunny Hand. Mr. Bunny Hand talks to Fraudbama and tells him how smart he is. Fraudbama likes Mr. Bunny Hand and wants to make him Secretary of State

Bill was calling for more hookers when he made the gesture, you're right!

Mr. Bunny Hand, - now I get it better - I went to the comment you left on the post above this one first.

Molson - ya know, the Left had field days with any Republican who made this gesture. They were called Satanists, New World Order types, etc etc. Where are these same hypocrites, um, Liberals, when their messiah DOES THE SAME THING?

It's interesting to note that you italicize Hussein, and not Satan.

I may be wrong, as I don't know what you were going for there, but to me it seems as though you are trying to emphasize the Arabic roots of Obama's middle name...in the same article in which you point out Obama's satanic ties.

What are you trying to say, David? Is Obama a Satanist because his middle name is "Hussein?" The major religions in the Middle East are Islam, Christianity, and Judaism. Last I checked, none of these religions worshipped Satan.

I've been italicizing his middle name for a long, long time to draw attention to him being a stealth Muslim.

His Satan worship has nothing to do with his name or his Muslim faith. It has to do with him making the longhorn symbol.

See, Liberals said Bush among others) is a Satan worshipper when gave the longhorn sign. So, I'm simply using the SAME STANDARD The Left used: anyone who give the longhorn sign must be a Satanist. The Left shouldn't mind me using their same standard and applying it to Pbama, should they? Gee, if they did that, they'd be hypocrites.

Hit the links in the post, read and learn which world leaders the Left labeled as Satanists because they were captured giving the longhorn hand sign.

Can you give us specific examples of the "Lefties" doing this? I promise I'll go get 'em for you.

"See, Liberals said Bush among others) is a Satan worshipper when gave the longhorn sign. So, I'm simply using the SAME STANDARD The Left used: anyone who give the longhorn sign must be a Satanist. The Left shouldn't mind me using their same standard and applying it to Pbama, should they? Gee, if they did that, they'd be hypocrites."

If you mean something else, you need to explain it better.