New York, NY - Celebrity Michael Moore unveiled his new self today at a press conference in Manhattan. Sporting an amazing slimmed down look, Moore explained his previous, massive weight was getting the better of him. "I'd eat all day, all night. And when I wasn't eating, I'd be...well, where do you think...on the toilet. It's amazing how many rolls of bathroom tissue a man of my previous size goes through in one bowel movement," said Moore.


Moore admitted that the rumors about him were true regarding hiring former circus workers whose job was to hose down and wash the elephants. "Yeah, it's true," reluctantly admitted Moore. "It was embarrassing. I'd take off all my clothes, go out to the back yard, and they'd hit me with water from the hose, and scrub me down with those huge, oversized, brushes."

It was not a pretty or glamorous job. Jose Gonzalez was one of those former circus workers. "I only lasted two days on the Moore job, I couldn't take it. He was disgusting. Compared to him, bathing the elephants is like working in a clean room." Another man who wouldn't give his name said, "His [Moore's] ass crack was the worst. Having to scrub that thing...I don't care how long the brush handle was and how far way from him I was. I lasted one bathing, and I quit."

"I can relate to the workers, but I was paying them minimum wage, so, it's not like they couldn't find gainful employment elsewhere," a somewhat indignant Moore said.

Moore says the secret to his weight loss is a combination of techniques. "I used diet, some exercise, and thanks to the gullible, liberal public, I'm wealthy enough to afford several series of liposuction surgeries over the last ten months," said Moore. "Not only am I thinner, but I can legally claim the lard they sucked out of me as fifty-seven separate dependents on my taxes," Moore added. Moore closed with, "Those people who called me fat and made fun of my weight can't do it anymore, so they'd better stop it! I'm hungry." 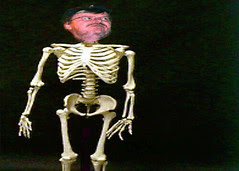